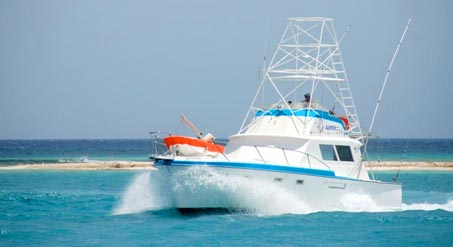 - We are the specialist in renting private Boat, Yacht & Fishing Charters on Key West.

We have negotiated the best rates with many yacht and fishing charter companies on Key West and can offer our clients a one stop solution to compare most boat rental prices on Key West. Compare the different boats, tour options and prices and make an informed decision on which boat to charter on Key West. We offer you a wide range of options from 50 foot sailing catamarans to 18 ft motor boats.

When you rent a private boat charter you can choose your own itinerary from a wide range of tour options. Go dive the crystal clear waters around the Island, snorkel the pristine waters or try your luck while reef or deep sea fishing. Rent the boat and spend the day with your private group.

The fishing off Key West is known to be some of the best in the world. Try your luck deep sea fishing, reef fishing or on the flats chasing anything from Marlin to Tarpon. Due to its location, there is always an area to fish in calm waters even on windy days. Checkout our fishing calendar below to get an idea on what type of fish are biting when you are visiting.
The island of Key West is located at the Southern border of US Route 1 and it is the most Southern city of the USA. It is about 4 miles long, 1 mile wide, and about 4.2 square miles only. The island is famous for its nightlife, which is mostly located on Duval Street but also for its beaches and the beautiful surrounding waters of the Florida Keys. It takes about 3 hours to reach Key West from Miami in order to cover the distance of 160 miles.

The Island has its own airport as well as many marinas were the boat and fishing charters leave from. It is also a major naval station for the US Navy and US air force.

The Island has been in hands of the Spanish and British before 1821 when it became part of the USA. It was very isolated until 1912 when the overseas railway extension was completed and connected Key West to the mainland.

One of the most famous inhabitants of Key West was Ernest Hemmingway who lived here during the 1920’s.